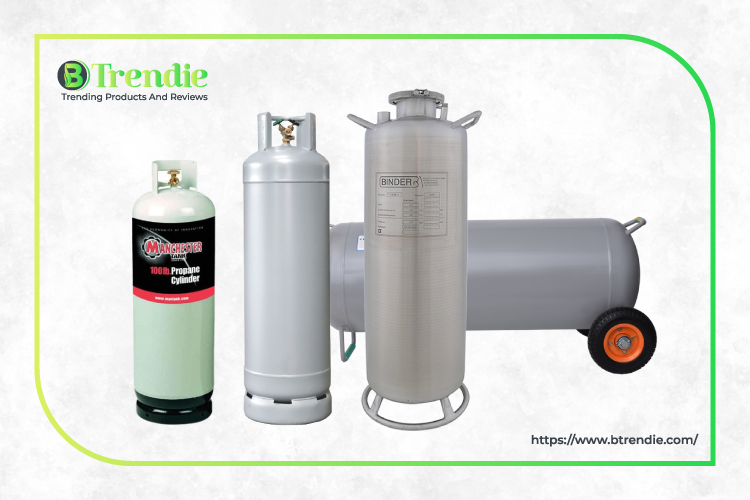 The 100 lb propane tanks are indispensable to any household and food-related business. While this holds true for heavy users, the standard-sized tanks seem too much for light usage – a trend that seems to be on the rise. For those who intend to use propane in outdoor barbecues or as an alternative fuel for small spaces such as apartments, hothouses, RVs, your fireplace, or even the garage, the 100 lb propane tank (also known as the 100# cylinder) is just the right size.

Which one should I buy?

Choosing the best 100 lb propane tank can be tricky, but we’ve made a list of the top 3 manufacturers: Worthington, Manchester, and King Flame. We highly recommend taking your pick from the top makers of 100# tanks. To make it easier for you, we’ve made quick reviews of each one based on two important categories:

Worthington’s 100 lb Propane Tank is a monstrosity even among its kind, and we mean that in a good way. It is the largest of their portable cylinders, allowing for longer use but without being as intrusive as standard-sized tanks. Hailing from the company’s Pro Grade series, Worthington 303953 certainly lives up to its long-standing reputation as a maker of high-quality, industry-grade propane tanks.

It’s a bit on the heavy side compared to other tanks on our list. And one might expect that a tank weighing close to 93 lbs would promise strength and durability. In all honesty, it is actually quite tough (thanks to its all-steel material) and has average resistance to damage. Just don’t expect it to come without a few minor dents and scratches, especially when it’s shipped improperly. We cannot stress enough how important it is to ship from a reputable dealer.

The exterior of this steel tank is painted over with Durabond Powder Coat Paint, which helps prevent rusting and ensures its reusability for a long, long time. Like any propane tank, it will arrive at your doorstep empty. You can have it refilled at a nearby propane company, which means transporting it yourself, or you can have them do the refills via truck delivery. If you’re doing the refills, it’s worth noting that the hands-hold collar makes it comfortable to tag along but only when it’s empty. As soon as it’s filled with propane, however, carrying it gets a bit awkward.

The tank is approved by the Department of Transportation (DOT), so it’s legal to travel with it. It’s also pre-purged, so you can have it filled with propane right off the bat. Unfortunately, it only comes with a 10% valve which has a risk of overfilling and leakage. It would be better to have it replaced with an Overfill Protection Device (OPD) to avoid accidents, considering that propane is highly flammable. You can get this done at a local propane supplier, though you may need to have it purged a second time.

Worthington’s 100 lb Steel Propane Cylinder is a POL valve tank, so it has the same reverse thread, “female” fitting as the large 250-gallon tanks from propane suppliers. If you intend to use it for grilling and other modern equipment which sport the newer “male” fitting, you will need an adapter which you have to purchase separately from the tank.

Overall, the Worthington Pro Grade 100-Pound Propane Tank is a good bargain and worth its price at roughly $150. It’s highly recommended for portable cooking, temporary heating, and use with propane-fueled appliances such as grills and stoves. There are no limits to its uses, however. Some people even use it for hothouses, RVs, and off-the-grid living.

Though not as popular as Worthington, Manchester’s iteration of the 100 lb propane tank is pretty decent, if not, better in many respects. What it lacks in capacity it makes up for in build quality and a cheaper price.

The Manchester 100 lb Steel Propane Tank is your standard Vertical LP Cylinder. The steel tank was shot blasted to ensure longer life and reusability. It was painted with a grey powder coat to protect it from rusting, then glazed with a polyurethane enamel finish. At first glance, it looks close to Worthington’s 100# in size. Once you lift it, the difference between the two becomes noticeable. The Manchester is not only surprisingly lightweight, but it’s also significantly lighter than Worthington as well, weighing only 70 pounds instead of a hundred. Thirty pounds may not seem like much of a difference but you’ll learn to appreciate it once it’s filled with propane.

Besides a lightweight, the tank comes with a Handle-EZ collar design. It is a formed, built-in handle that covers the usual sharp edges of the collar, allowing for a more comfortable grip. Insofar as 100 lb tanks go, the Manchester provides the easiest handling. You shouldn’t bump into problems when loading and unloading it in your vehicle. It’s definitely a good choice if you intend to have the tank refilled yourself, which can save you a few bucks.

Manchester’s 100 lb tank is DOT approved, so it’s safe to travel with one, empty or full, granted that you follow the legal guidelines for your state. Like any tank larger than 50 lbs, it has a POL reverse thread valve (a.k.a. female fitting). The good news is that you can use it with old appliances like heaters and stoves. The bad news is you’ll need an adapter for everything else that requires a male fitting. POL also has a risk for overfilling, unlike the OPD valve found in smaller 20 and 40-lb propane tanks. Though it is comforting to know that such a risk is negligible.

One thing that might irk users is the tank’s capacity. Normally, a 100 lb propane tank is able to hold around 24 gallons. Worthington had no problem meeting this standard, but for some reason, Manchester’s version falls 1 gallon short. This means more frequent refills unless you have several 100 lb tanks in your arsenal. Another drawback is that it doesn’t come pre-purged, so you won’t be able to have it filled with propane. Purging will cost you extra, so what could have been a $140 tank would easily add up.

The verdict? Manchester 100 lb Steel Propane Tank is still a good deal despite its setbacks. The Handle-EZ collar is a really nice touch and makes for easier transport. So while you will end up spending a little more than $140 on the onset, eventually it will mean bigger savings if you stick to having the tank refilled yourself, and most especially if you decide to buy more than one.

Flame King’s version of the 100 lb propane tank is one of the cheapest, so it’s easy to tell why people love it – and why we included it on our list. Apart from a lower price tag, it comes with a few other extras such as bigger capacity, a safer valve (which, by the way comes pre-included with the tank), and an overall good product.

Unlike the Manchester which underwent shot blast treatment, Flame King YSN-100 is made of nothing more than welded high-grade steel. It’s still quite durable, just not as tough as you might want. The paint job is also not that remarkable, though it is powder coated for rust protection. Due to its average-ish quality, shipments tend to be problematic and leave it with dents and scratches. However, this depends on where you’re ordering from and some customers have reported getting their package in perfect condition. So as long as it is properly cared for during shipment, there is no reason to worry.

It weighs in at a solid 80 lbs. Though not as light as the Manchester, it’s still better than the cumbersome Worthington. Again, the 13 lb weight difference will be obvious once you decide to have the tank filled on your own. But we should add here that its collar is not as comfortable as Manchester’s 100 lb tank.

Having been tested under X-ray and hydrostatic conditions, we can safely say that Flame King’s 100 lb tank does have good quality. At least you can be assured that it won’t leak when exposed to X-ray or high water pressure. It’s also DOT approved and if you’re unfamiliar to state laws regarding the transport of tanks, it would be best to talk to a local propane dealer.

Some dealers actually sell Flame King’s 100 lb Propane Cylinder with a premium OPD valve. Also known as an Overfilling Protection Device (a feature that is only required in smaller tanks) it eliminates the risk of overfilling and possible leaking. This places it at a great advantage over Worthington and Manchester’s 100# since it’s safer to use. Both of which are known to carry only POL valves. There are others that continue to offer the tank with a 10% POL valve, so if you prefer the female fitting, we don’t see why you shouldn’t get those instead. It all boils down to personal preference and what you intend to use it for.

Flame King’s 100# can hold more propane than Worthington and Manchester. It has an impressive capacity of 25 gallons, which exceeds the usual 24-gallon capacity found in most. That means you can use it longer and that it requires fewer refills. The tank isn’t pre-purged, however, and you need to take it to a local dealer. Once purging is done (a process that takes 10 minutes), you can have it filled with propane.

For around $130, the Flame King 100 lb Steel Propane Tank is a worthwhile investment.

We’ll have to give it to King Flame YSN-100. Not only does it best Worthington and Manchester in capacity, but it is also the only 100 lb propane tank sold with either an OPD valve (if you’re too keen on safety) or a 10% POL (if you plan on using it on appliances with reverse thread fittings). Moreover, it’s the cheapest 100 lb cylinder you can get with your money. With a total value of only $130 including free shipping, it’s the best bargain out there.

King Flame’s 100 lb steel propane tank isn’t too heavy either, which could mean bigger savings in the long run. By having it refilled yourself, you can save money compared to having a local propane supplier come over to refill your cylinders.

It’s a time-sink. Endless Weird. But despite that, we endure. Amid the rick rolls, 2 girls’ cups, and other sick stuff they put up, it still will and forever remain, the gateway to practically everything.